Other Bands on the Bill Stomatopod Dummy Whelms 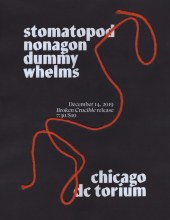 This is going to be a record release show fro Stomatopod, so bring your turn tables!

Record release party!! Come join us on Dec. 14 with some other great bands as we celebrate the release of our second album, “Broken Crucible.” DC Torium is an awesome DIY art space, and we’re psyched to be playing there with a bunch of our friends. It’s BYOB, so when we say it’s going to be a party; we mean it!

In the run-up to the show we were interviewed by Calvin. Here is said interview:

CORNBRAT: Welcome back to D.C. Torium, Nonagon. You played here with self-evident and TRAINDODGE in May 2019. What's been keeping you all occupied since we last saw you?

NONAGON
Robert: We have been in the process of recording a new record!

John: We are hoping to finish it up at Electrical Audio this week and plan for a Summer ’20 release… After 17 years as a band we will finally have an actual, full-length LP.

Tony: We'll leave it up to the reader as to what "LP" really stands for.

CORNBRAT: How did you guys first meet and decide to play together?

NONAGON
Robert: I replied to an ad looking for a bass player for sexiest band in Chicago. When that didn't pan out, John and Tony asked me to play in their band.

John: Tony and I had played in one of those “one show at the Fireside before breaking up” bands but decided we liked each other’s dumb jokes too much to call it quits. I had just reconnected with Robert who I knew from the early-nineties, Champaign, rock days so I was relieved when the sexy band turned him down and we could snatch him up.

Tony: I also auditioned as bass player for the sexiest band in Chicago, but Hungry Man didn't want me.

CORNBRAT: This past spring, Nonagon played at the Phratry Records documentary premiere and music showcase in Newport, Kentucky. Can you tell us about that experience, and about any memorable gigs you've played with Phratry recording artists?

NONAGON
Robert: We've done several weekend tours with Knife the Symphony and they are always fun. Especially after the shows when we dance in the parking lot.

John: During one tour we all caught a matinee of Fury Road together. During our drive to the next city, Jerry jumped from their speeding van into ours and stabbed Tony with a spear fashioned from a rusty hi-hat stand.

Tony: Can't keep John away from that Cincinnati Chili. Any reason to head that way for a show and he's in.

CORNBRAT: What does 2020 have in store for Nonagon?

NONAGON
Robert: At the rate we're going, probably more overdubs on the record.

Tony: We'll probably be the opener for one of our kids' bands, if they'll let us.

CORNBRAT: How have you seen Chicago's music landscape change in the past two decades?

NONAGON
John: I’m not sure we’re in the right position to say. 1) We aged out of it a while back. 2) We’ve lucked into a vibrant, creative, and ever-evolving pocket of it that hasn’t really adhered to the rules of the rest of the city’s “scene.” We keep meeting folks who make amazing music, but other than that our POV is mercifully myopic.

CORNBRAT: Who are a few of your favorite active Chicagoland bands?

NONAGON:
John: The list is ridiculously long, but the bands on this upcoming bill (Stomatopod, Whelms, Dummy) would be a great place to start. Djunah, sewingneedle, Salvation, The Cell Phones, Terriers, Shellac, Rented Rooms, Paper Mice, Daddy’s Boy, Sweet Cobra, Panda Riot, Imelda Marcos, Photo-Curio, the “Mans” (both Montrose Man and Hungry Man)… I could go on for a LONG TIME. Chicago is in a really good place right now.

Tony: All our friends' bands are the best bands.

CORNBRAT: Can I get some more snare in your monitors, Rob and John?

NONAGON
Robert: I have learned to tune out Tony while I play.

John: God no… That snare is ridiculous. It can be heard from space.

Tony: EVEN I DON'T WANT THAT THING IN MY MONITOR.

CORNBRAT: Who smells the worst after a show?

NONAGON
Robert: I don't sweat, but it's probably still me with my ever-changing fad diets.

John: Tony’s cologne is called “Dreams” or “Whispers” or some shit… so, yeah… Tony.

Tony: By worst, you mean best. Thank you. Also: I sweat, but I never smell bad. So there.

CORNBRAT: You have $10 for lunch in Chicago. Where are you going?

NONAGON
Robert: Chick Fil A, for God hath blessed me with the rich bounty of ten dollars. Amen.

Tony: Does Satan have a lunch spot?

CORNBRAT: Any shout outs you'd like to give to people who've shaped what Nonagon is?

NONAGON
Robert: Is beer a person?

John: It took a village to raise us. Throw a random dart at any PRF BBQ and you are going to hit someone who helped us.

Tony: If it weren't for our very forgiving wives, we'd have broken up 15 years ago.