Drinks and a Movie With Snaklab 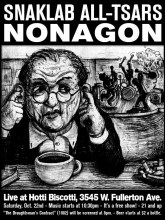 We followed a somewhat somber screening of a weird and creepy costume-pic by Peter Greenaway called The Draughtsman’s Contract. Tony sat through the whole thing and says he liked it quite a bit... My distracted and intermittent viewing allowed me to catch only the surreal ending. Out of context, the strange dialogue, brutal murder, and walking statuary were just plain disorienting.

The show itself had a nice crowd (especially considering that it was at 3500 w. Fullerton on a White Sox World Series night). The 40 or so folks that flowed through the space made the small room feel full. Some stalwart friends of both bands came from WAY-outside of the neighborhood (Jay and Diana form up north, Brian from Skokie, Brendan from Valpo, Snaklab fans from all over), and Paul B. even rushed over straight from Comiskey after the White Sox win... I’ll try to remember these human kindnesses the next time a Republican press conference puts me in the mood for a rage-filled, corn-liquor fueled, indiscriminate maiming-spree. 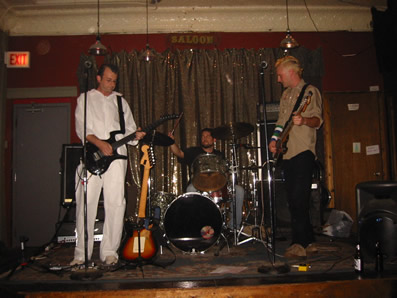 The coin-toss determined that Snaklab go first, and they were rock. Despite some slight PA woes, a freshly-mohawked Jim, 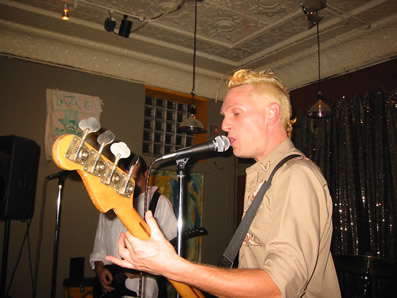 Buco in cleanly pressed cover-alls, and an exceptionally-smiley Paul played a fun and energetic set that included some of my favorites: Upsessed, The Jimihop, etc. It was great to see them again. I’m grateful they agreed to play. 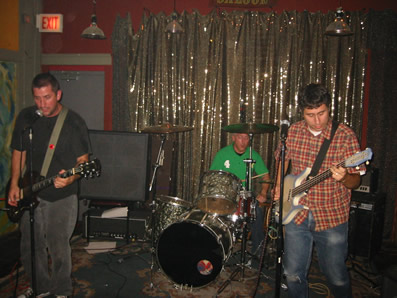 Here’s a set-list eyed view of our show (remember our motto: “all titles: working; all works: in progress”)

1) Fight Song - In order to establish momentum we dramatically started our set without warning, but all momentum was in danger of being squelched when I broke a string somewhere in the middle. We finished the song, but since I forgot to bring a back-up guitar I was faced with the task of replacing the string: something I don’t do quickly even in environments of low-stress.... This, however, lead to one of the best parts of the show:

2) The Impovised String-Changing Interlude - During which Jim Kamp jumped on stage and scream/sang stuff over fucked-up riffs from Robert and Tony. It was great! All the while, Jim’s experienced and cool-handed brother changed my string in record time... Kamps rule! 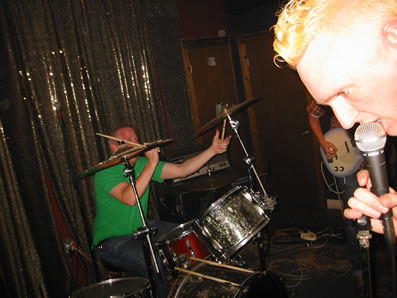 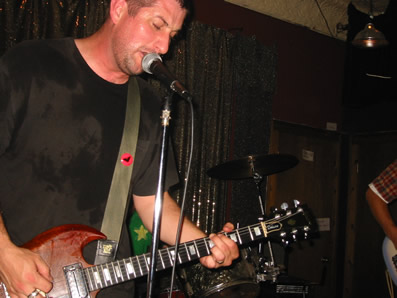 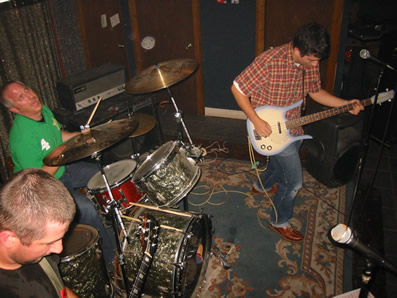 9) Fragile - A Tubeway Army cover—this time w/out the Theremin. 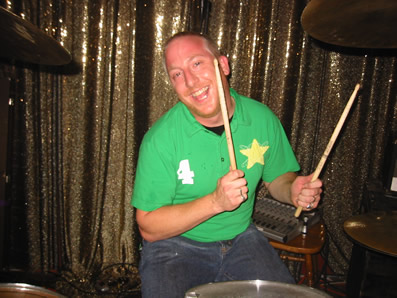 12) Call and Response - We thought we were done here, but some masochistic folks seemed to want more (and it wasn’t 1am yet), so –even though we hadn’t practiced it in months- we played:

There were plenty of little screw-ups, and everything was a little bit loose, but that just seemed to fit: It was great to play a simple small-room show with a basic PA and no fuss... I hope we can do this kind of thing more often. It felt a little like the days of house parties and Channing Murray (an old church you could book for DIY shows in Urbana). Pure, loud, sweaty fun.

The folks who stuck around seemed to have a good time and bought plenty of beer: enough that a) some of them danced, and b) Richard -the guy who now books stuff at Hotti Biscotti under the auspices of “The Nervous Center”- seemed up for doing this again in a-few-to-six months...

More photos and larger versions of these can be found at Robert's Flickr Site's Nonagon album. Robert also made the flyer for this show, check it out!