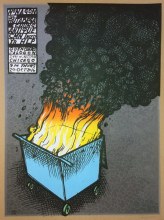 Indiana’s Joshua Wayne Hensley has been writing, recording, and birthing hopeful sad-bastard songs under The Rutabega moniker since early 2002.In 2011 Joshua joined forces with Garth Mason, and The Rutabega evolved into a bona fide Carp Rock power-duo. They have since played a bundle of shows (mainly across the Midwest, but also venturing to both coasts), recorded live sessions with Daytrotter and WPRB’s Jon Solomon, and released 2013’s full length “Brother The Lights Don’t Work.” Their eagerly-anticipated Comedy Minus One debut “Unreliable Narrator” followed in June 2016.

Josh was sick, so The Rutabega couldn't make it.

Mike (bass), Charlie (guitar) and Whitney (drums) formed Chung Antique spring 2009 while studying at The Evergreen State College in Olympia, Washington. Always instrumental, but initially a quartet with extra percussion, the band developed on the local house-show circuit. In 2011, it pared down to a three-piece, self-released the seven-song demo Go Poetry!, and toured the West Coast. Now based in Seattle, the trio continues its quest for the perfect balance of math and melody. Sweater Weather — recorded at The Hive and Zoo Zhop in Vancouver, B.C. in winter 2012-13, and released on San Francisco's 20 Sided Records in January 2014 — is Chung Antique's first full-length, the culmination of five years spent zeroing in on its sound. The group completed its first full U.S. tour last summer, followed by a week long West Coast trip in spring 2015. They are currently working on a follow-up LP and playing out wherever and whenever they can.

Though a mere three members strong, Cmn ineed yr hlp conjures a racket worthy of the enormous monsters they compose their records about. Founded in late 2007, the band bonded over a mutual broad-reaching taste in music and general culture. With comparisons ranging from Turing Machine to Pink Floyd, the trio stakes out their own unique brand of mathy, progressive post-rock.