The band currently known as Nonagon finally had its first performance for relative strangers.
It was a bit surreal.

We played a cookout in Libertyville that was hosted by a coworker of Tony's.
When we got there we thought there was NO WAY we were actually going to be allowed to play:

The suburban yard was filled with kids and neighbors from the ages of 3 to about 75 and we were to set up on an outdoor patio facing a park in a very suburban, family-oriented neighborhood.

When we got there at about 6:30 we were immediately coerced into playing softball.
My team beat Tony's team like 32 to nothing.
Robert wisely demurred and hung out with Christy. The two of them quickly decided that they had nothing in common with most of the party goers and left to drink their beer in deep center field.

We ate grilled goods sitting at a picnic table with a very diverse group that included Alan, a groovy guy who was sponsored by Pepsi when he was a skating 14 year old and has somehow managed to escape the sad cycle of childhood stardom (except for the Hustler shoot he had to do with Dana Plato for glue-huffing money), and the elderly neighbors from across the street (at one point the husband of this couple held up his now half-empty little bottle of Snapple and yelled to his wife, "Oh! This is JUICE! Juice, honey!").

Since Paul hadn't yet arrived, we employed clever stalling tactics that were comprised mostly of multiple trips to the bathroom, tuning, and trying to convince the host, Dave, that we're "really more of an 'indoor band'". But Dave pulled rank (he wanted to get rid of the "lame neighbors") and we finally hit the well-lit patio.

Almost everybody over the age of ten preferred to watch from the grass beyond the lights, which meant that the only people we could actually see (aside from Christy and later Paul) were 10 and under.

At this point I asked Tony if this was the weirdest show he's ever played, and he made me feel oddly comforted by telling me that the J Davis Trio once played an 8-year-old's birthday party. "I think his name was Max."

So, after apologizing for the impending ruination of Dave's soiree, we played... loudly.

We did notice a steady stream of people leaving the party over the next 20 or so minutes, but that was offset by some good-natured heckling from Tony's coworkers in the glomen. 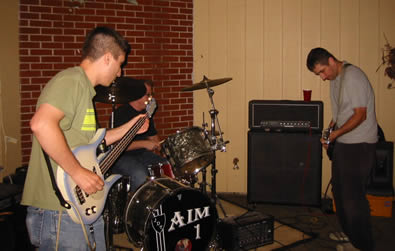 After royally screwing up the first song (but recovering nicely thanks to Robert's zen like temperament) we played what I think was a pretty-darn-good-for-a-first-show first show.

Everything was a little too fast.
We had to start one song over... twice.
And there was literally NO applause (not even polite) after one of the middle songs...

But it was a lot of fun and we managed to break a sweat in the evening chill. 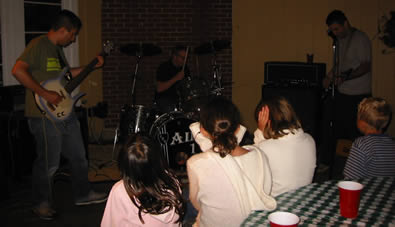 I've got to hand it to those kids, though.
They sat at the picnic table RIGHT IN FRONT OF US for the whole show and only flinched occasionally. Since they were the only people we could see, I found myself directing most of my lame "on stage banter" to them, which oddly took the pressure off as far as actually seeming "witty" or "smart". I felt a little like a guest host on Zoom. 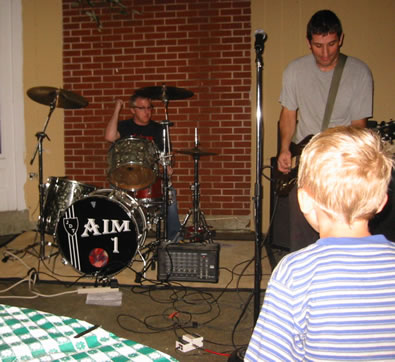 We found out later that one of them (the blonde kid seen on the right side of the pictures) was totally drunk from sneaking sips of beer. This was actually a relief to me because at one point during the music it looked like he was about to fall asleep. 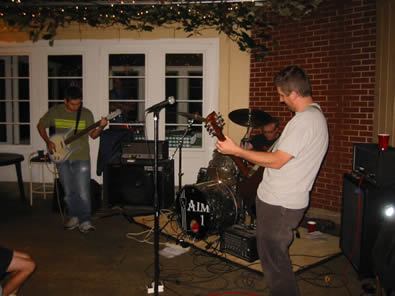 Paul said that we made some soccer-moms quickly gather their kids and leave, and that a little dog was so enraged by our noise that he kept giving us the stinkeye and growlly little barks... but reviews were for the most part charitable:

One woman was very audibly overheard saying "well at least that last song was pretty good" when we turned off the amps.

On a more disconcerting note... I guy who is supposedly Ton'ys "biggest fan" (has traveled great distances to see him play in other bands) left before we were done... Hmmm.

It was, in all seriousness, a perfect first show. It was pressure-less and so weird it didn't even make me (that's right, ME) nervous.

It also made me REALLY itchy to play more shows!!

The pictures at the end of this link give a pretty good feel for the weirdness of the whole thing. Most of them were taken by Christy with Robert's camera before the battery ran out (during the second or third song).

Here they are, double chins, bad posture and all (view them with friendship-tinted eyes):

My favorite is (of course) the one in which the kids are clutching at their ears.