"Three days of rapid-fire rock, food, art, poetry, and all sorts of fun stuff right here in beautiful NYC. A completely DIY, not-for-profit event with a hearty disdain for corporate sponsorship and a love for all things music and art, PRF.BBQ.NYC proudly welcomes bands and artists from across the globe (that's right, globe) happy to share their art with the people of New York City. ALL of the money collected at the door will be... used for the event itself and to help out the generous touring bands who have agreed to drive hundreds and fly thousands of miles purely to play their music for us lucky souls. And if anything's left over, I'm buying myself a hot dog." -John Houlihan 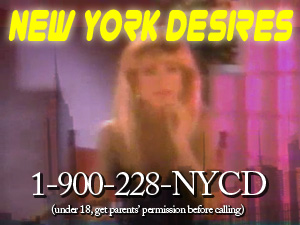 This was our most ambitious out-of-town show yet and another in the ongoing series of shows put together by the members of the Electrical Audio forum (a.k.a. The P.R.F.). As a band, we've fantasized about being able to record with our friend Justin (of The Austerity Program) at his recording studio in Queens and thus fulfill one of our deepest New York desires. When the opportunity arose to play the NYC PRF BBQ we jumped on it. Well, I wouldn't quite say "jumped." John and Tony had to convince me that it would be okay if I left safety and comfort of my house (and Internet connection) for long weekend roadtrip.

John conveniently got to fly to New York for some work thing, so the drive over was just Tony and myself. The ride was fairly uneventful, but we did drive through this fake looking forest of glass on the way through the Pensylvania mountains. 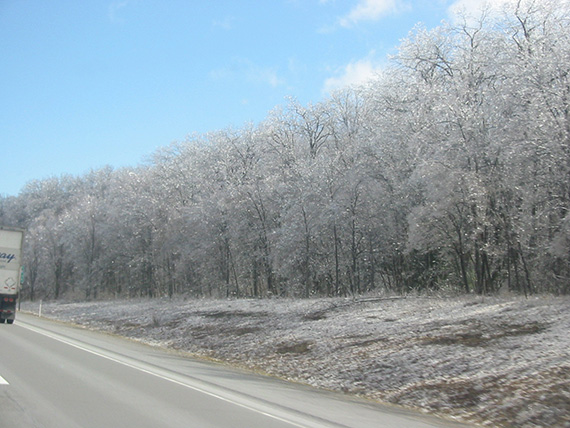 Ice was covering all the trees for miles upon miles. 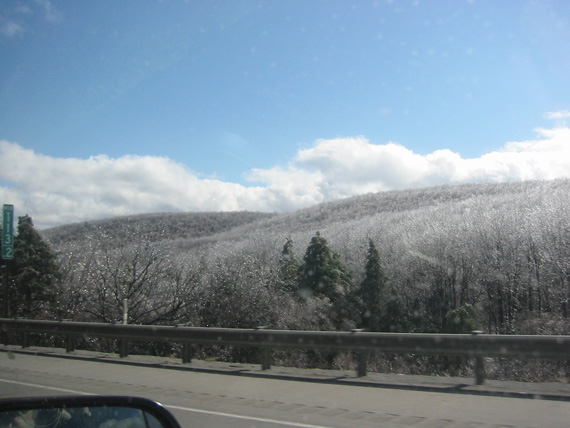 Well that's enough nature crap for now. Suffice to say we made it back to civilization and the next day we decided to take a crack at recording a few songs in the aforementioned studio. This is the mixing board. It has many knobs and sliders... 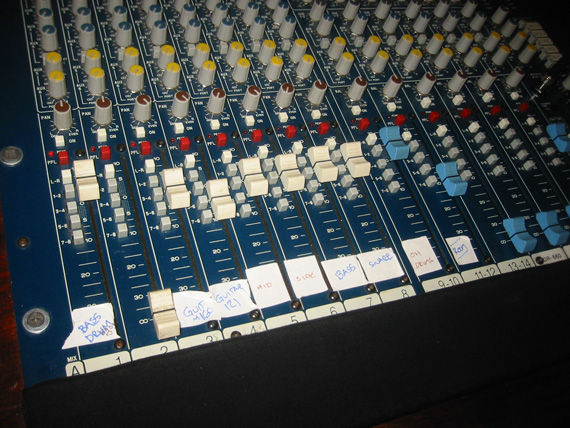 The recordings went very well, especially for what was a very limited amount of time... to have. Most of the credit for keeping the recording going smoothly goes to Justin... 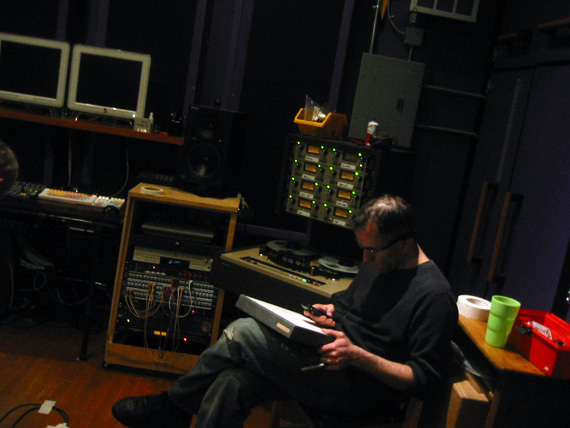 We got through five songs in under three hours with only vocals left to do. Eventually we will finish these tracks up and release them in some form or another.

That evening was the first night of the PRF BBQ at a place in Brooklyn called Don Pedro's. There wasn't much barbequing, but there were plenty of bands. (My digital camera is literally 11 years old so it takes horrible pictures in low light. Only about 1 out of 4 shots is anywhere close to being good. This is why I have converted all these to black and white to hopefully get a little more detail and to increase my arty street cred). 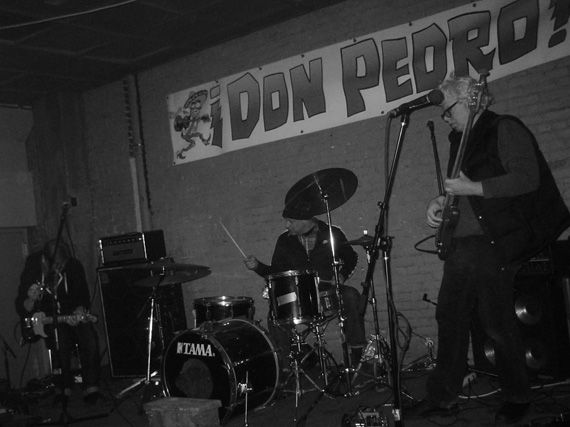 One of the highlights of the night was Maple Stave... 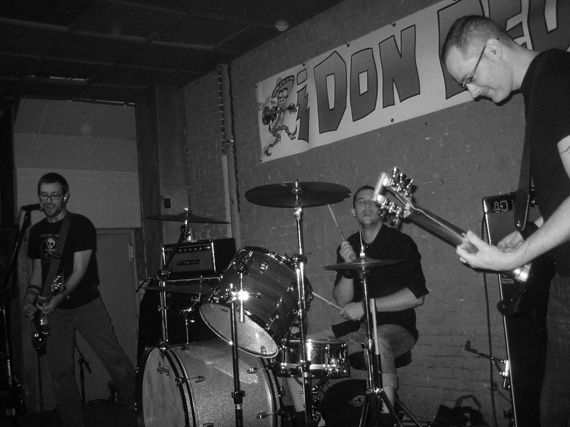 This is John Houlihan, who was pretty much the main organizational force behind the whole weekend... 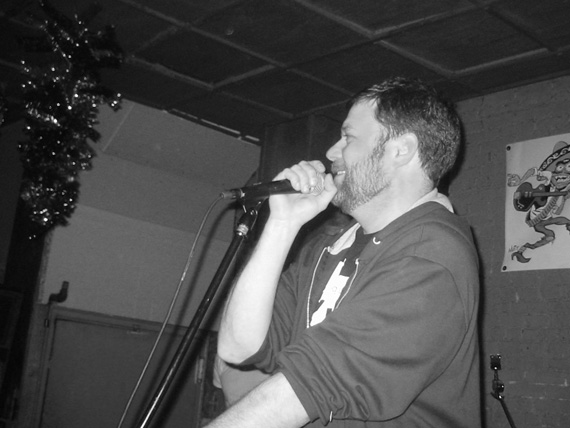 The next day it was our turn to play. We packed up and shared a trailer with The Austerity Program's wall-o-amps and headed back off to Brooklyn. 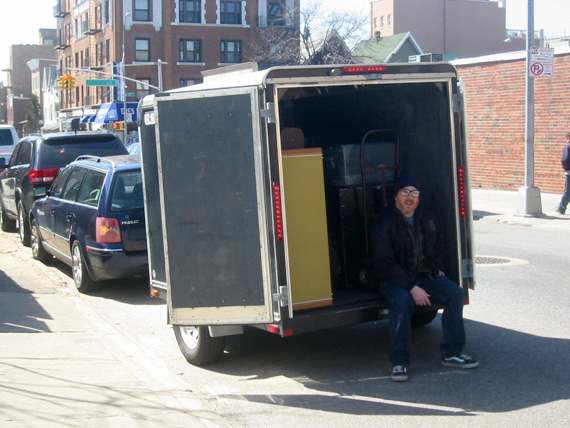 The venue was an art space called Secret Project Robot. This is what the outside of the building looked like: 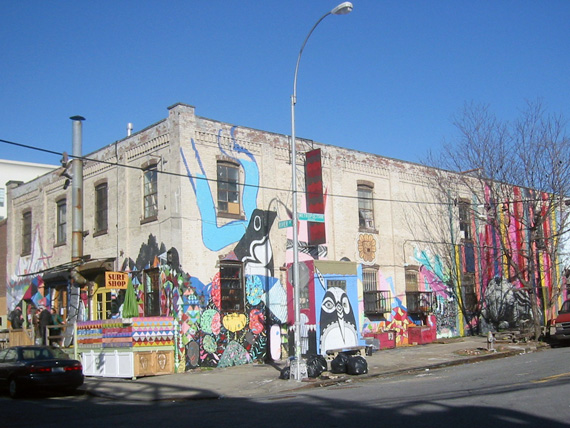 The inside of the space was laid out nicely and the stage had a weird little skateboard transistion in the front. 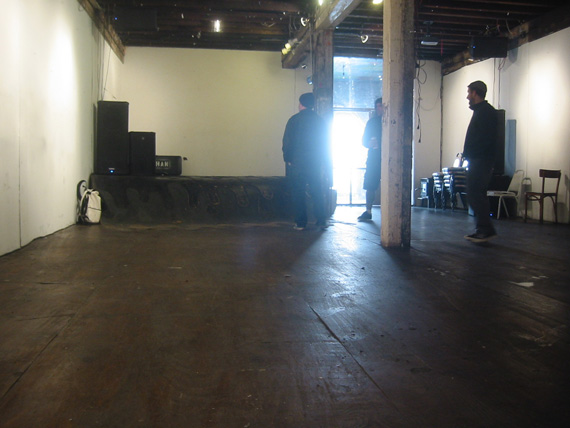 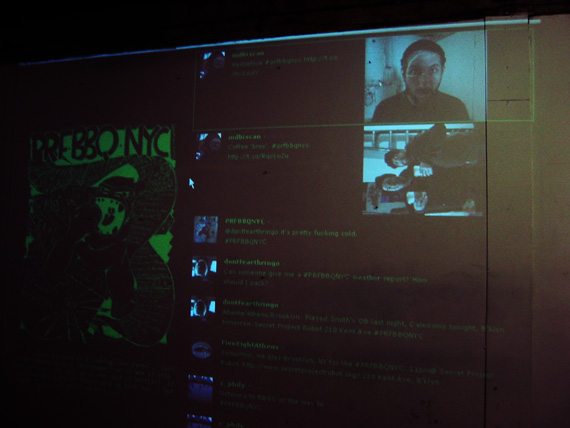 After some werewolf poetry slamming, the first band to play was Blood Sucking Fiends. They had played a few bands before us at the Chicago BBQ too. Here they closed with a commemorative cover of Jay Z's "Empire State of Mind." 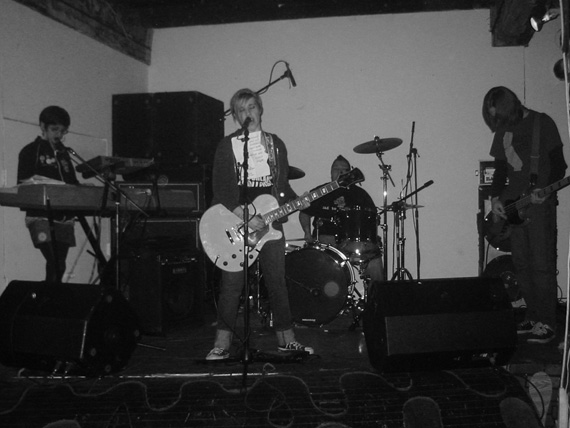 Meanwhile... Thad and Justin were out on the street busking some Austerity Program material. Tony had to do the obvious coin drop... 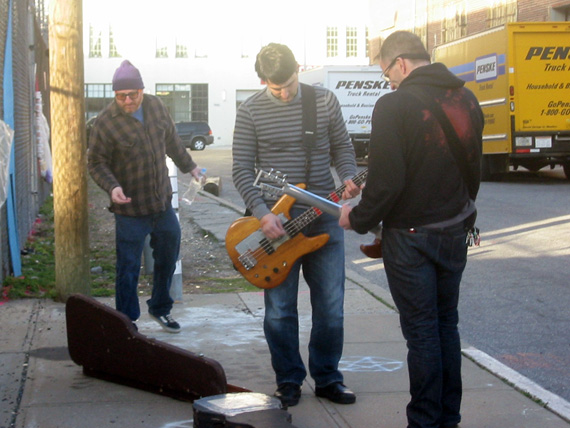 Many more bands played and I didn't get very many good photos. Here's a decent one of Blacks: 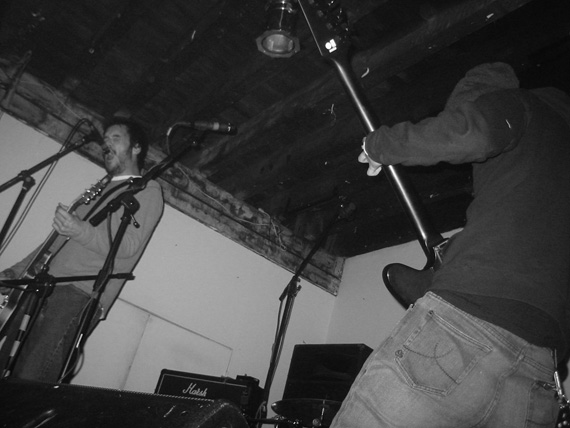 Sometime between the above photo and the following we played our set. It was one of our better performances, if I do say so myself, and we seemed to be fairly well received by the crowd (thanks everyone!). We were followed by Brett Eugene Ralph's Kentucky Chrome Revue and then, the moment that Nonagon was waiting for, The Austerity Program. 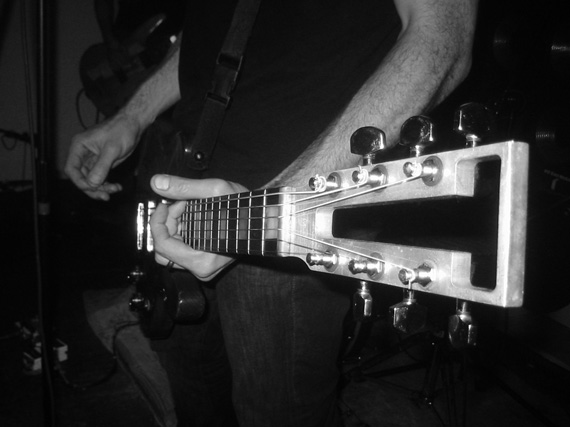 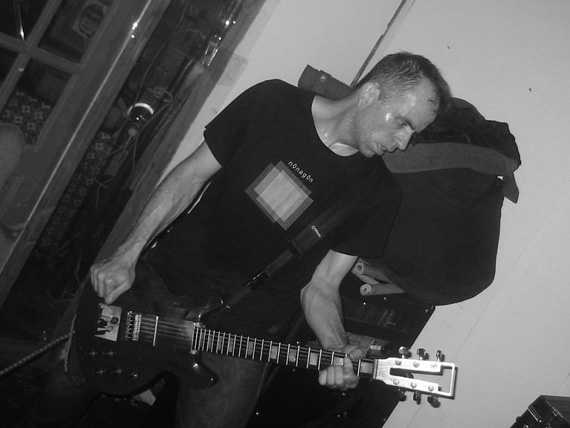 Shortly after I snapped the above photo I was informed by "the management" to stop taking photos. But I had a couple more in me. I had to get this photo of John doing some vocal work for band: 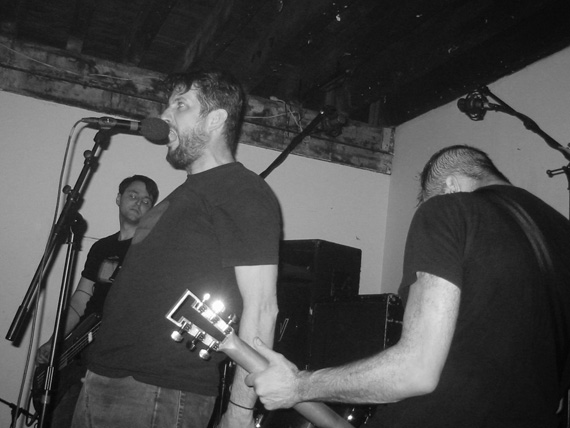 Most of us DIY rockers would like to say we are in it for the music. But that's a lie. It's all about the Jacksons... 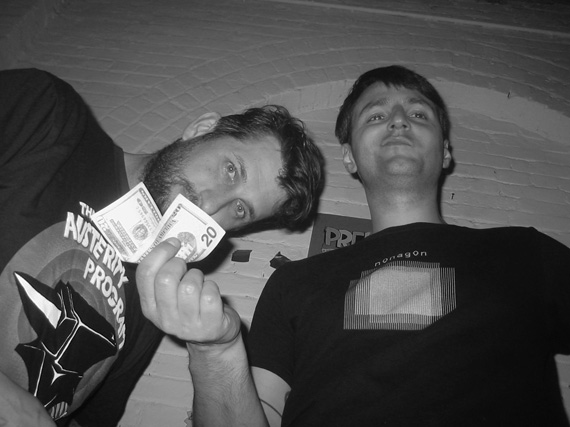 Day three got started and there was a bit more interest in the BBQ side of the PRF BBQ. Here, for example, was an aluminum guitar cake. 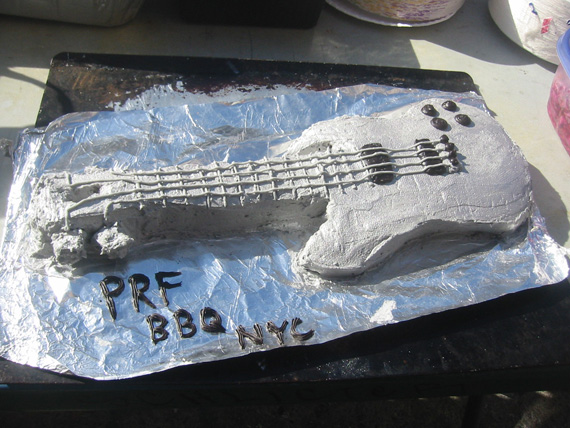 Before the music started, we decided to check out some local restaurant food and happened across this fantastic Vietnamese sandwich shop. 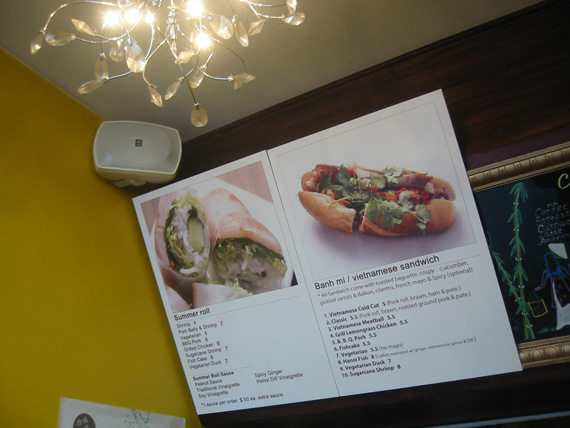 The bands just kept on going and grill kept on grilling. One of the highlights of day three was Risk / Reward. 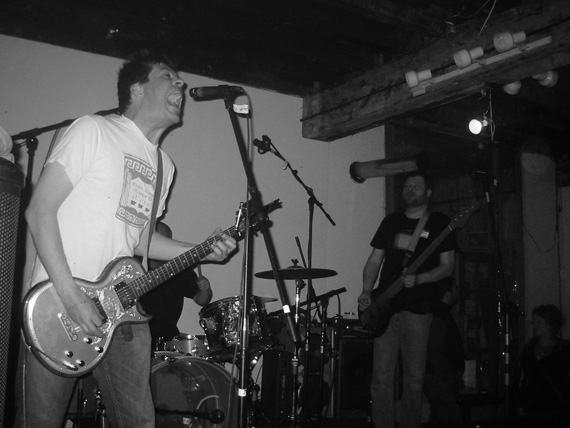 The curvy stage front provided a nice place to tone our thigh muscles and look like Joey Ramone. 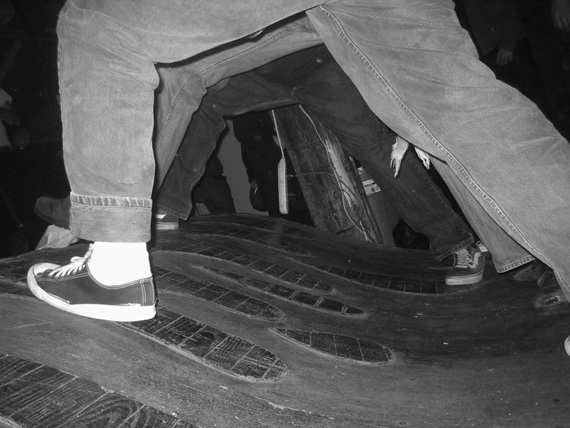 Thanks to all who came out (especially Paul and Jason who were with us most of the time). More thanks to John Houlihan for the hard work in setting most of this up. Finally, a big thank you to Jill and Justin for the hospitality and giving us a place to stay for the (long) weekend (and let's not forget the recording session, thank you, thank you, thank you).

These are great photos! Thanks for sharing!